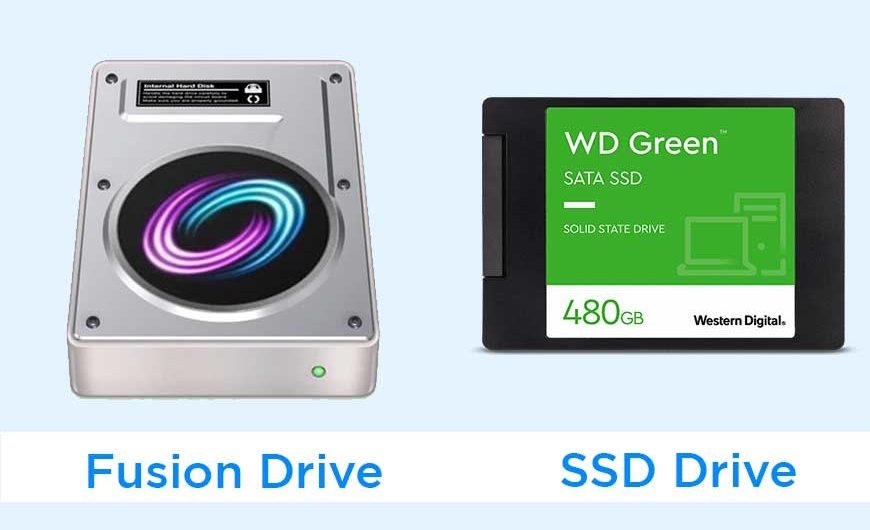 You will have to make a decision between a fusion drive or SSD drive whenever you are trying to upgrade or purchase a new iMac. As a rule of thumb if you have got the budget go for an SSD drive, but you will get a lot more storage at a lower cost if you select a fusion drive.

A fusion drive is a relatively new technology. Hence, people have limited knowledge of it and its advantages or disadvantages.

What is a Fusion Drive?

As the name implies a fusion drive has two separate drive fused together. It contains a serial ATA drive, which’s a regular hard drive with a solid-state drive. A 27″ iMac contains 1.92 TB HDD + 128GB SSD= 2.12 TB of fusion drive.

The most frequently accessed files, the macOS and the applications are placed on the flash drive. The less frequently data is stored on the hard drive. One of the advantages of a fusion drive is that you will experience the benefits of both solid-state drives and hard disk drives.

You get a much faster operation between files thanks to the solid-state drive while having a huge amount of storage space for keeping all your files, movies, back up files, photos, and many more.

As mentioned above, the main difference between an SSD and a fusion drive is the price. If you are in a dilemma between a large storage capacity and a faster computer, you can go with the Fusion Drive. That way, you don’t need to spend a fortune on SSD.

However, a fusion drive comes with its disadvantages and cons too.

One of the cons of a fusion drive is that it consists of an HDD too. This implies that the fusion drive can fail if you drop or damage it in any way. Another con is that it’s not as fast as an SSD.

In a battle between fusion drive and SSD, the SSD drive will have the edge. SSD have both read and write speed greater than the fusion drive. Fusion drive are mostly used in iMAC computers.